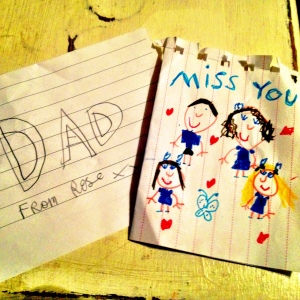 I don’t travel abroad for work a lot, but when I do, it tends to be for a fair bit of time – at the moment, I’m away for a fortnight in New York. One of the hardest things about travelling is missing your family, especially when you have young children. Over the last few years, though, there’s been more and more lovely little bits of technology that make that gap shrink just a little, and make being so far away a bit less painful.

Mobile phones were the first, of course, and tech companies have long spun utopian visions of how mobile tech connects us seamlessly and perfectly, as if we were in the same room again. The reality is less impressive, especially with roaming call and data charges making it incredibly expensive to do anything more than have a quick chat.

Skype, Facetime and Google Hangouts are awesome, coming closest to the tech companies idea of perfect telepresence. But its the playfulness that makes the tech really work – my 8 yr old daughter spinning around with the iphone so the facetime call takes on the look of an 80s rave video, or my 6 yr old holding her school homework right up to the webcam so I can see her drawings.

But the things that really seem magic are physical. The photo above is the two notes that my daughters slipped in my luggage before I left. I’ve been responding by sending them messages daily via BERG’s Little Printer, and their excitement at seeing the message print out, as if by magic, as we chat on Skype is a delight to watch. We’ve been playing with what to send – I started with just saying hello!, and then sending a good night message before they went to sleep. Then I started sending jokes – first the set up line, and then after they’d read it, the punchline. Little Printer is perfect for short, serial messages like this, so I might play with it further, and tell them a story about New York, a few messages a day.

We don’t have teleportation yet, but these little physical messages feel like a step on from the glass screens we’ve been using to talk to each other for the last 10 years or so. They are bits of me they can keep, pinned up on the wall or kept on the bedside table, like the short notes they slipped into my luggage. It feels like teleportation, to be able to make something print out in Hove from my computer in NY, to make a message typed out on my screen manifest itself as a physical object many thousands of miles away.

We’re gradually getting there – first we could send voice across the miles, then SMS texts, then MMS photos, then live Video, and now, actual things. We’re not in the seamless perfect future of the tech companies visions, but the patchwork telepresence we have from all this little bits of tech is much more emotionally satisfying.